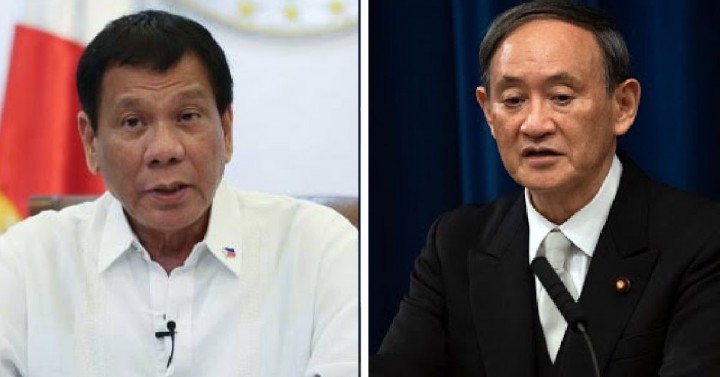 In a teleconference call initiated by Japan Prime Minister controversial China’s Coast Guard Law and the 2016 Hague ruling won by the Philippines against Beijing were discussed with the Philippine President Rodrigo Duterte on Wednesday evening, May 19.
In a readout, Prime Minister Suga Yoshihide also expressed its opposition to unilateral attempts that undermine peace and stability in the South China Sea.
“Japanese Prime Minister Suga expressed his opposition to the continued and strengthened unilateral attempts to change the status quo in the East China Sea and the South China Sea, and shared grave concerns about recent developments in China, including the Coast Guard Law,” the Japanese Embassy in Manila said.
China’s Coast Guard law, enacted in January, empowers its Coast Guard to use armed force against anyone found in Beijing-claimed waters. The Philippines lodged a diplomatic protest, with Foreign Secretary Teodoro Locsin Jr. Describing the law as a “verbal threat of war.” In response to the law, the Philippine Navy also sent more ships to the West Philippine Sea.
The Japanese Embassy said the two leaders agreed on working together closely toward the maintenance of peace and stability in the region under the rule of law such as the United Nations Convention on the Law of the Sea (UNCLOS).
Meanwhile, Malacañang stated in its report on the phone call that the president emphasized the importance of working for peaceful conflict resolution, “stating that the Asia-Pacific region cannot afford conflicts between neighbors.”
Japan was among the first countries to express concern about a swarm of Chinese vessels at the Julian Felipe Reef, which is located within the Philippines’ exclusive economic zone, in March 2021.