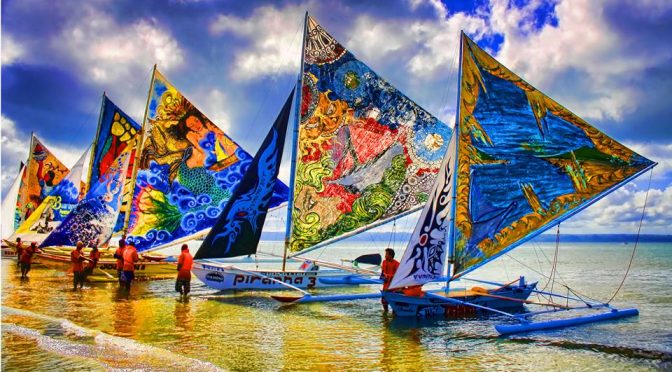 The Iloilo Paraw Regatta, the oldest sailing event in Asia and the city’s major festival, will be held on May 30 on virtual platforms. It was canceled last year due to the pandemic.
The city government will stream a prerecorded video presentation on the festival.
“This is a manifestation of our strong commitment to continue celebrating our rich cultures and traditions despite being confronted with the challenges of this pandemic, because our identity as Ilonggos is truly worth celebrating,” Iloilo Festivals Foundation Inc. (IFFI) said in a statement.
There would be no actual sailing event for this year’s celebration but a video production that will feature among others the process of paraw sailing and interviews of those who previously participated in the festival, the event organizer stated.
The 49-year-old festival, which has drawn international acclaim and the distinction as the oldest and one of the most colorful sailing events in Asia, is usually held in early summer.
Paraw is a colorful, small, and slim double outrigger boat made of indigenous materials that have traditionally been used for transportation and fishing by Ilonggos. The paraw has become a popular attraction at the annual regatta, attracting a large number of participants and spectators.
The festival was last held in 2019, and 41 paraw competed in three categories of the race based on the length of the boat. Thousands of people have traditionally lined up along the shoreline of this city’s Villa Arevalo District to watch the race, which spans 36.5 kilometers from this city to Guimaras.