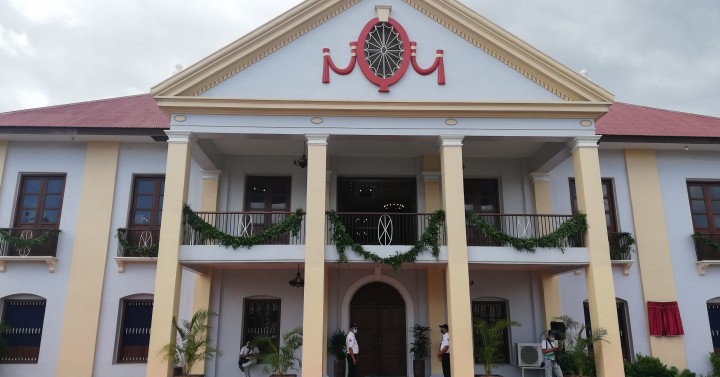 The National Historical Commission of the Philippines (NHCP) turned over on Monday, June 21, to the provincial government of Pangasinan the historical landmark in this town, the Casa Real (Royal House), after its full restoration.
Casa Real, which was built during the Spanish regime in the Philippines, is a national historical landmark in the province and served as the country’s former seat of government during the Spanish regime.
NHCP chairman Rene Escalante said the landmark was a witness to the rich, glorious, and even sad history of the town and the province. Casa Real will later on become a museum of Pangasinan that will enable Pangasinenses to appreciate history and it is also a way to give back to the next generation.
“We are preparing the staff here on how to handle the items that will be placed here as well as the security details; the entry protocols for visitors, because we understand that the artifacts that will be housed here are fragile or sensitive and valuable,” Governor Amado Espino III said.
“Department of Tourism (DOT) Secretary Berna Romulo-Puyat’s advice was very inspiring. She said we could seek the help of the different national government agencies concerned,” he added.
Espino said they are also in coordination with Pangasinense artists for the artworks to be displayed in the planned museum.
Tourism Infrastructure and Enterprise Zone Authority (TIEZA)funded PHP50 million for the Casa Real restoration, while the provincial government of Pangasinan shelled out PHP33 million for its refurbishment since 2016.