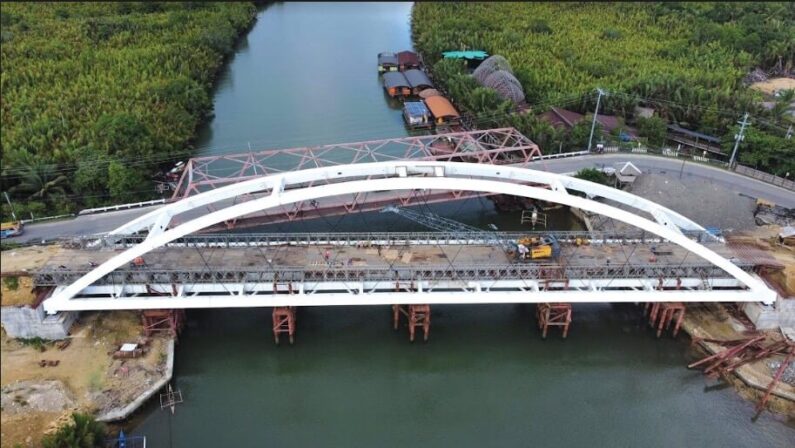 Japan remains the country’s top source of ODA, with active grants and loans worth $11.2 billion, accounting for 36 percent of total foreign aid the country received as of 2020.

Here are the other “Build, Build, Build” programs funded through loans or grants from Japan, through JICA.

This project involves the improvement and maintenance of about 1,088.23 kilometers of arterial national roads across the country, enhancing transportation capability and efficiency, and ensuring sustainability of roads.

The expansion of the existing 24.61 kilometers alignment from Brgy. Borol, Balagtas along NLEX up to San Rafael, Bulacan reduced average travel time between the two points from 69 minutes to 24 minutes.

This will improve the transport logistics and mitigate congestions in Davao City and thereby contribute to economic development and sound urban development of the city.

Once the construction of this 30-kilometer, four-lane expressway is completed, travel time between Tarlac City and Cabanatuan City will be reduced from 70 minutes to 20 minutes.

This involves the development, construction, and improvement of about 174.58 kilometers of access roads connecting the Bangsamoro Autonomous Region in Muslim Mindanao (BARMM) and other regions in Mindanao. The project will alleviate poverty, suppress and prevent conflict, and promote peace and order in the area.

6. Program to support the rehabilitation of Marawi City

This involves the reconstruction/rehabilitation of Marawi Transcentral Road, supporting the development of New Central Business and peace-building efforts.

This includes the construction of interchanges on four major intersections in Quezon City, alleviating serious traffic congestion and enhancing transportation capacity and efficiency around Metro Manila.

The construction of a long-span road bridge connecting Mandaue City of Cebu Main Island and Lapu-Lapu City of Mactan Island and connecting coastal road will improve transport capacity and efficiency.

This project aims to mitigate the damages caused by flood or inundation in affected communities. For the Cagayan River sub-project, there will be construction of revetment structures for the most eroded riverbanks at Alibago, Enrile, and Cataggaman, Tuguegarao City, construction of river dikes, partial excavation of river channel, and drainage channel improvement at Tagoloan River, and construction of two off-site retarding basins along Imus and Bacoor rivers as part of the Imus River Sub-Project.

This will strengthen the resilience of the communities along the Cagayan de Oro River stretch from the Macajalar Bay to Pelaez Bridge to climate change and other natural hazards by mitigating flood risks in the area.

The project area is situated at San Juan River Basin and its adjacent Maalimango Drainage Area in the eastern part of the province of Cavite. It will mitigate flooding along Cavite industrial area covering San Juan River Basin. About 7,000 houses in the area of 556 hectares will be protected from flooding.

The project will decrease flood and inundation, reduce flood damages and other ill effects on the population, and mitigate flooding through channel improvement works for Middle Marikina River, including the construction of Manggahan control gate structure and the construction of two floodgates at the joining sections of Cainta and Taytay rivers to Manggahan Floodway.